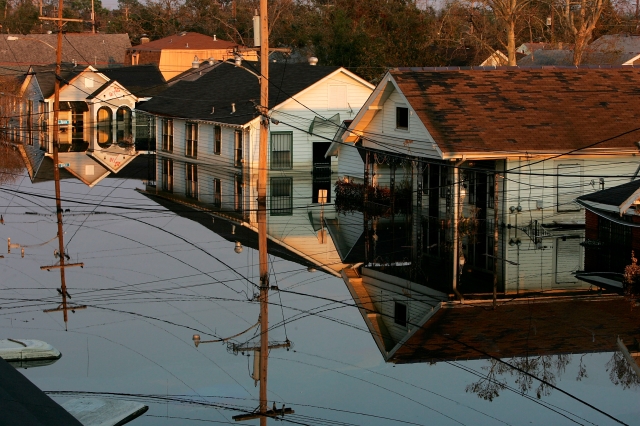 I first began litigating insurance coverage cases along the Gulf Coast, in 2003 in a small Parish (St. Bernard) neighboring New Orleans. From the outset, whenever a major storm approached, locals would remind me that the area was under sea level and formed in the shape of a bowl. They cautioned that if the big one ever hit, the city and surrounding area would fill up and flood.

For the next two years, disasters were averted. Whenever a major storm rolled up the Gulf it always diverted course and bypassed New Orleans. That good fortune caused some to declare that they would never evacuate.

That all changed ten years ago when Hurricane Katrina made landfall on Monday, August 29, 2005. I had just completed an important insurance coverage trial the previous Friday. All of our trial exhibits, and those of our insurance company adversary, remained locked in the first floor of the St. Bernard courtroom. Little did we know that soon they would all be washed away along with so much else.

I remember being at the airport awaiting our flight home a couple of days before Katrina hit. We were eating beignets and watching coverage of the Hurricane on a big screen TV. There was no panic; no one spoke of evacuation. Everyone assumed that the city would be spared just as it had so many times before. We were wrong.

So much was lost; so many lives, so many homes, and so many businesses. My co-counsel lost his home, office building and vacation property. Fortunately, he and his family had the resources to make a last minute decision to evacuate. We were all reminded this week of the suffering sustained by those lacking the ability to leave.

We learned a lot from Hurricane Katrina and other catastrophes both before and after. Mostly, we learned that stuff happens. When it does, and if we are lucky enough to survive, we can and will recover – – my co-counsel rebuilt his homes and office and, working cooperatively with the insurance company’s counsel we were even able to replicate our lost trial exhibits. There is no storm that can’t be weathered with the support of our neighbors, government and yes, even our insurers.